Westminster Winners — Where Are They Now?

MSNBC.com catches up with the eight surviving Best in Show winners.

They say that every dog has its day. But for the show dogs that have won the coveted Best in Show title at Westminster, the spotlight never fades. These four-footed celebrities are still hounded by pupperazzi intent on feeding a dog-crazy public tidbits of news that has them drooling for more. So what have the top dogs of this decade been up to lately?

Gentleman James, as he’s been dubbed by his adoring fans, has literally been on the go since he won the title a year ago. Within hours of being proclaimed America’s top dog, he was whisked off in a limo on a hectic media tour around New York that would have made the most seasoned celebrity wince at the pace. He appeared on every popular morning show in the country; he was patted by Martha Stewart and stroked by Regis and Kelly. He got to visit Fox and Friends and the hosts of the Today show. He lunched on fillet steak at Sardi’s and was beamed into homes around the world from a live satellite feed. As the country’s top dog, he also became the spokes dog for the Angel on a Leash therapy program Angelonaleash.org and has specialized in visiting Alzheimer’s patients.

“He’s turned out to be an even better therapy dog than a show dog”, says David Frei communications director for the Westminster Kennel Club and the Angel on a Leash Program. And we all know his excellent show record that brought him to Westminster in the first place.”

Apart from therapy visits around the country he recently took part in the American Spaniel Show and has been doing some Rally Obedience training,” says his trainer Kellie FitzGerald who has been by his side throughout this hectic year.

He has a heavy schedule for his swansong during Westminster week too. His program includes visiting children at the Ronald McDonald House in New York City and appearing as various society benefits for Angel on a Leash. He will also make appearance on the green carpet on the first night of Westminster before handing over his crown the next evening. After that, the pace may slow down a bit but his therapy work will carry on.

And as his winning predecessors have proved; once a top dog, always a top dog.

Rufus has been vacationing and enjoying a laid back lifestyle in Mexico. He happened to check in to a hotel in Mexico City for the World Dog Show at the same time as the Miss Universe Contestants.

“His celebrity status exceeded that of the pageant contestants. And trust me these women were gorgeous!” says his owner Barbara Bishop. “They were all over him and he just lapped it up. They all took turns have their photograph taken with him.”

Rufus has been so busy that he had to put his children’s book on hold. Apart from the World Dog Show, he also competed in the Champion of the America’s Show, making him the oldest Bull Terrier ever to win.

He also became a grandfather when his daughter Sarafina had a litter of nine puppies.

“She’s been working hard to get back into shape and will be taking part in Westminster,” says Bishop. “However Rufus, won’t be going this year. He will be watching at home and gearing up for his next celebrity appearance. He’s taking part in the Village School production of the Cat in the Hat in Holmdel, NJ and will be appearing wearing his Dr Seuss hat. He was such a success last year; they’ve invited him back again to star in the role.” 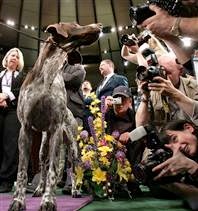 “She’s enjoying the good life,” said Linda Stark in Conifer, Colo. “We live on a 42-acre estate in and she loves the great outdoors. She enjoys hiking and fishing at every opportunity. We often take day trips to Vale and she loves to go along and be where the action is. She’s wonderful to have around because she’s very friendly and outgoing and still has lots of fans.

“These days, the only thing she hates about her stay at home lifestyle is the snow. She’s such a princess; she can’t wait to get back indoors.” 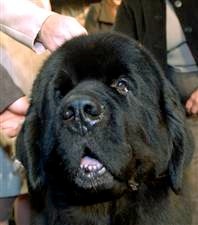 “He’s a total couch potato or to be more specific, a rug potato,” says his owner Dave Helming of Flemington, N.J. “I also retired last March which has been wonderful because I get to spend more time with him and our other dogs.

“His favorite pastime is chasing the deer that roam around in the field adjacent to our home in,” says Helming. “Of course he’s never caught one.

“Initially, I think he missed the dog show world. Going places, staying in hotel rooms and meeting people is what a show dog’s life is all about. And of course with it, comes lots and lots of attention. But now, I think he’s quite happy to be retired and living the quiet life.

“He’s past the baton on to his son Jefferson who will be making his first appearance at Westminster this year and will be watching the telecast of the show from his favorite rug.”

Whether he recognizes his off-spring on the green carpet remains to be seen. 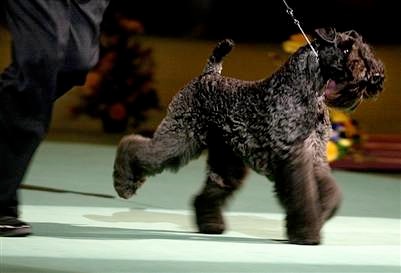 In his heyday, Mick, who was born and bred in Liverpool, England was hailed one of the best British imports alongside the Beatles. He came to the United States after a spectacular show career at Crufts in London and continued to wow the crowds here, too.

In this past year, he had major abdominal surgery and a growth removed which fortunately was benign.

“He was also neutered,” says Bill McFadden. “Since then he’s been running around and acting like a two year old!” 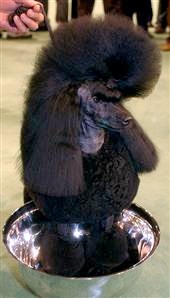 This petite black French Poodle retired straight after her Westminster win to become a stay-at-home mom.

“But lately she’s working out with her daughters Posh Spice and Sweet Spice to maintain her figure,” said pet parent Roxanne Wolf.

Sweet Spice, who’s known as Jamey outside the show ring, is getting ready for her first appearance at Westminster.

“Spice Girl has become very fashion conscious,” Wolf said. “I’ve spent a lot of time lately updating her wardrobe. Her favorite outfit is her blue winter coat with brass buttons and a gold lining. She wears it accessorized with pearls. She only recently started wearing pearls. Before I thought she was too young as I’ve always considered pearl jewelry to be a rather matronly fashion look. Well she’s in that older bracket now.” 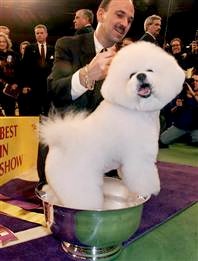 “ I still take him with me to dog shows,” said Scott Sommer of Houston. “Even though he’s now 10 years old, he misses the show life more than you can imagine. It’s a great life for a dog. They are with you 24/7.Everyone they meet showers them with love and attention and it’s really exciting. He’s still very demanding and loves to be in the spotlight.”

JR’s fans remember him from his heyday, and he still gets birthday presents and gifts at Christmas from around the world. Sommer also gets regular invitations and requests to bring him to parties and other special functions as the guest of honor.

“Even though he’s spoilt rotten, he’s kept in shape. I could show him tomorrow.” 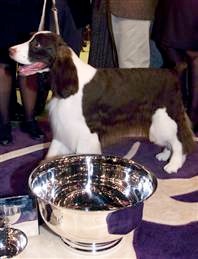 At 13 years old, she is the oldest surviving Westminster winner.

“I still take her with me to shows,” said Kellie FitzGerald of Bear, Del., who also handles James, the current champion. “She loves to go on the road and hang with the other dogs in hotel rooms. Naturally she’s a little arthritic with age. But she’s still in great shape and kept her show figure after all these years.”

Sandy Robins is an award-winning pet lifestyle writer. Her work appears regularly on MSNBC.com, MSN.com and in various national publications.