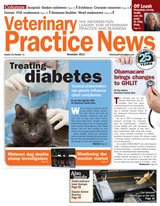 The Fix Is In

Since Dr. Gary Norsworthy launched his extern program in 2001, he has had a steady steam of both national and international students who have flocked to the Alamo Feline Health Center in San Antonio, Texas for a reality check in what it’s like to practice feline medicine in the real world.

When Polar, a two-year-old Golden Retriever born with paralyzed rear legs contracted osteomyelitis and needed to have a back leg amputated, his owner Pamela Patton of Paradise, Pennsylvania wanted to have an artificial leg made for the dog.