Ruff Day at the Office? Take Your Dog to Work Goes Wild

From doggie dinners to group pet dances, workplaces put out the welcome mat for pups ! 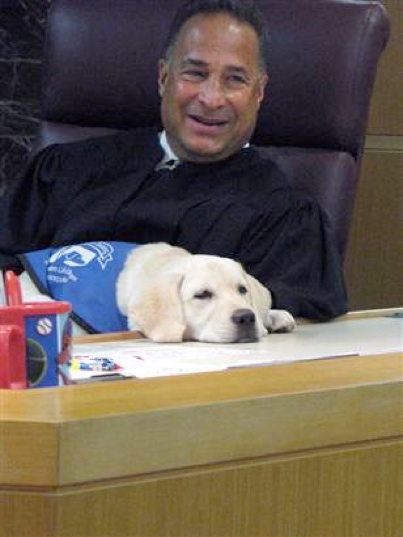 County Court Judge Paul A. Levine takes his dog to work at the Criminal Courts Complex in Clearwater, Florida.

From a hike through the Belgian woods to a doggie flash mob held concurrently in New York and San Diego and linked via Skype, dog lovers around the world have been digging up unusual ways to celebrate the 13th annual Take Your Dog to Work Day on Friday, June 24.

“The event has become truly international,” said Beth Stultz, marketing manager for Pet Sitters International, the organization behind this canine happening that celebrates dogs in the workplace and promotes pet adoption.

“Back in 1999, only a handful of companies took part, but the occasion has grown exponentially — along with America’s love affair with our pets,” said Stultz.

Now, nearly one in five U.S. companies is pet-friendly. More than 90,000 companies signed up to participate last year. “This year, judging by the entries already received, it’s going to be the biggest and most original event to date,” said Stultz. “People are really going out of the way to treat their dogs to a really fun day.”

This year’s entries reflect a true cross section of the global corporate world.

A Belgian public relations company called GC2 Communicatie will send employees and 18 dogs on a two-hour hike through the woods on the Belgium-Netherlands border. At the end, everyone will have dinner at In den Bockenreyder, a popular pet-friendly restaurant in Esbeek, Netherlands.

“We learned about the event on Facebook,” said Mirjam Claassens, who organized the hike. “The dogs will have an opportunity to swim in the little streams and play with one another along the way. We will be raising money for Hachiko (www.hachiko.org), an organization that trains assistance dogs to work with people with motor disabilities or who suffer from epilepsy.”

Dogs in New York and San Diego will go to work with their pet parents and later “meet up” to celebrate the first ever National Dog Party Day, an event that will take place simultaneously in both cities and will be linked via Skype.

“It’s a double celebration,” explained organizer Arden Moore of the first-time-ever event. “It’s all about working like a dog during the day and then getting together afterward to party like a pup.” There’ll be a doggie dance party, too, and the event will benefit the San Diego Humane Society and SPCA and the Mayor’s Alliance for NYC’s Animals,a coalition of more than 150 animal rescue groups and shelters. It’s still not too late to go; visit www.dogpartyday.com.

In Clearwater, Fla., Pinellas County Court Judge Paul Levine will be taking his dog Chilly to work at the criminal courts complex. While Judge Levine presides over his cases for the day, courthouse clerks will take turns entertaining Chilly and his courthouse buddy, a Labrador seeing-eye dog in training named Justice.

James Bond the Dog, who has more than 4,500 followers on Twitter, will be celebrating along with 50 other canine counterparts with an 007-style fancy dress event at BFG Communications, a marketing company in Hilton Head, S.C.

“Employees and their dogs are dressing up as their favorite Bond characters and the canines will spend the day fighting evil and destruction Bond-style,” said spokesperson Michael Friedman. “It’s going to be thirsty work and the dogs will be served special canine martinis — shaken, not stirred — with their dog biscuits.”

Climb Nashville, an indoor climbing facility in Tennessee, is setting up a climbing area with special ramps for canine entertainment. “There will be no actual rock climbing involved,” explained Tyson Martin, the company’s operations manager. “But we will harness up the dogs just for effect and lead them along special incline ladders.”

At Door Number 3, an advertising agency in Austin, Texas, pooches are going to start their work day with a taco breakfast. “There will be tacos for pet parents too,” said PR consultant Wayne Henninger. The company also booked a pet beauty therapist to give doggie massages. And, of course, there’ll be doga (that’s dog yoga). “There’s a possibility of the first ever doggie Ping-Pong contest,” said Henninger. “We are still working on the rules.” All money raised will be donated to the Austin Humane Society.

Cyndi Finkle of Art Works Studio in Culver City, Calif., is hosting a Dog Art Camp on the 24th and her art students will be invited to bring their pooches to class. “We did a Bring your Parents to Art Class event and did wonderful Georgia O’Keeffe-inspired flower projects. At the canine class, we will do art projects that are inspired by dogs, using the students’ pets as models to celebrate the dogs in our lives,” said Finkle.

“We’re expecting about 10 dogs, including two Great Danes, a wirehaired fox terrier, a Welsh terrier, a Shih Tzu, a French bulldog, a pug and a boxer, and will be holding a doggie-owner lookalike contest,” said Jillian Miller, social director for DAR Inc., a marketing and printing company in Anaheim, Calif.

Lucky dogs whose owners are employees of WellPet in Tewksbury, Mass., will first be put to work — in focus groups — and then have a day of taste-testing. Manicures and pedicures will follow, in pastels, naturally. It’s summer’s hottest hue, after all. Dogs who want to party can dance the day away at the Zoom Room Dog Training Center and Social Club, which will hold a doggie disco.

All this sounds like an excuse to pamper pups in hilarious ways, but psychologists say that instead of being disruptive in an office environment, pets actually have a positive effect, boosting employee morale and thus increasing productivity and sales and improving communication between staff members.