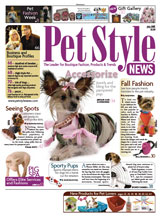 To find out what’s haute and what’s hot in pet fashions, you only have to visit beaches in Malibu, sidewalk cafes in South Beach, Miami and dance clubs of New York City and zoom in on what teenagers and the twenty-something fashionistas are wearing. Scale down the designs and tweak the shapes for a wearer with four paws and a tail and you’ve captured what the trendy pet set is wearing too!

Picture it: A tiny church festooned with pink and white lilies. Family and friends hush as Mendelssohn’s Wedding March begins to play. Ah! Here comes the bride and her dog in matching outfits…

In the Pink for Spring

It seems that bunches of bright yellow daffodils and sweet smelling hyacinths won’t be the only signs of spring this year. Pooches are going to herald the change of season too as they strut out in the latest casual wear in colors that contrast to winter’s darker hues.

This holiday season, Santa’s famous reindeers Dasher, Dancer, Prancer and the gang are going to think they’re hallucinating that the Big Guy from the North Pole has been miniaturized and multiplied all over the country.

Coming out of the Closet Celebrity Style

Once upon a time the world of fashion was ruled by talented designers who understood form and fabric and the fact that clothes maketh the man. From their lofty ateliers in Paris and Milan, New York and London, they decreed what was considered to be haute and what was not.