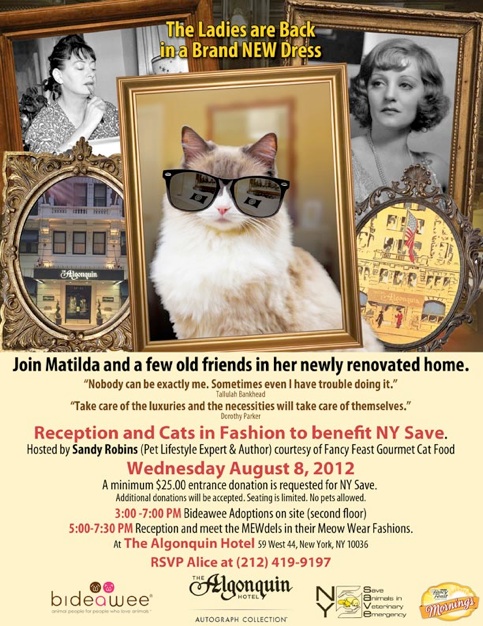 She asked Fancy Feast to hire Sandy Robins to help with the purrty preparations and sent out invitations to old furiends, many of whom flew in from around the world to celebrate, along with some new friends whom she instantly charmed and converted into lifelong fans.

For a number of years, Matilda has hosted an annual charity event to raise funds to various animal causes and the highlight being a stylish feline fashion extravaganza with some of Matilda’s show cat friends modeling designer creations.  And they happily returned to help their furriend out again for the special occasion mewdeling some furbulously outrageous, exotic and just plain cute outfits designed by Matilda’s favfurrite catourier, Carla Reiss.

The party was held in the new $2000–a-night John Barrymore suite and the cats in their finery were allowed on the furniture, including the bed.

Matilda of course took center stage in her kitty condo and looked on while a bevy of photographers and reporters recorded every tail flick and whisker twitch for their various international media outlets.

The party flowed downstairs into the hotel lobby and the famous Round Table restaurant where legendary literary luminaries Dorothy Parker, Robert Benchley and George Kauffman to name a few used to meet for lunch earning themselves the title of the Vicious Circle.

Here guests continued to mingle and bought tickets to win great raffle bags filled with fabulous feline goodies. Then it was kitty confession time when Matilda asked pet lifestyle expert Sandy Robins to dish the details of her latest food fixation, Fancy Feast’s new breakfast-inspired feline entrées called Mornings. Matilda has been dining on the breakfast inspired entrées that include poultry, seafood, garden veggies and real eggs dishes since her return to the hotel.

Generously she made sure all partygoers received special kitty swag bags with a sample of Mornings along with coupons to try other flavors. She even provided new dinnerware for the food to be served in. There was also a host of other goodies all designed to enrich the feline lifestyle such as toys, grooming tools and a calming collar for those anxious moments.

And, ever mindful of her human guests, a stream starched waiters bearing silver platters of canapés and delicious finger foods worked the room. There were flutes of champagne and of course, Matilda’s signature cocktail. (1 ounce Absolut Mandarin, 1/3 ounce Cointreau, and 2 ounces fresh orange juice, served in a martini glass with a splash of champagne).

While her guests partied, prowled and purred, Matilda retired unnoticed from the festivities to get her beauty sleep and get ready for her workday. She holds the important job of Directfurr of Guest Relations at the hotel.

The feline history of the Algonquin dates back to the 1930’s, when on a dark and stormy night, (as Snoopy would have described it,) a stray and bedraggled orange tabby sought shelter in the hotel. Then owner, Frank Case, ever the quintessential host, served the cat milk in a champagne glass at the renowned Blue Bar and invited him to become a permanent guest.

He wanted to call the cat Rusty because of his coloring. But John Barrymore, who was a regular at the famed Blue Bar, suggested he be called Hamlet, a role he was starring in on Broadway at the time.

And thus begins the tale of the Algonquin cat. All the males have been named Hamlet and all the females Matilda. The incumbent Ragdoll is Matilda the III and the tenth feline in the hotel’s feline dynasty.

As the Directfurr of Guest Relations, Matilda greets guests and gives them a fur-fix when they are missing their own pets left at home. And now, as a spokes cat for Mornings, she’s on a campaign to ensure that cats are indeed served proper breakfast-inspired meals for that all important first meal of the day. And she’s promoting the idea that cats and their owners spend quality time together over breakfast as a purrfect way to start the day.

Recently, in  her  own words, she wrote the following on her Facebook page: “If I eat my Fancy Feast Mornings in the afternoon – does that become Brunch?”

Yes Matilda, indeed it does! It works well for dinner too! 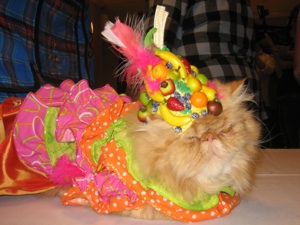 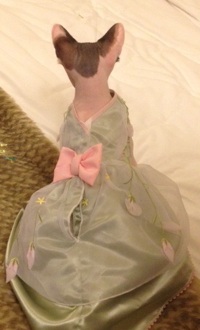