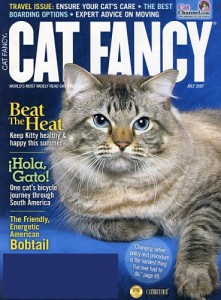 I Was a Cold War Spy

During the 1960’s, the CIA trained many non-humans, including cats, to spy on America’s Cold War enemies.

Touching portraits of a Japanese grandmother and her beloved cat have made the pair an Internet sensation.

The True Nature of Cats

Recently the Purina PetCare Company took a team of experts that included veterinarians, behaviorists and nutritionists to South Africa to study the African Wildcat in its current natural habitat as this species is believed to be an ancestor of our domestic kitties dating back 10 000 years. The goal was to learn what motivates their behavior and draw parallels with our feline companions to help cat parents recreate some of those natural traits in a domestic setting in order to improve cats’ lives. Sandy Robins was one of a small clowder of feline media influencers chosen to work with the team on this voyage of discovery.

The day after an unexpected tornado hit the small town of Brimfield in New England wiping out more than a quarter of the homes in the area in June 2011, emergency services were still on high alert attempting to deal with the aftermath the devastating destruction. Paramedic Jonathan Hall was one of approximately 60 first responders at the firehouse when a tree worker walked in holding a days-old kitten he’d found clinging to life in a tree.

How To Groom Your Cat

Cats may be very efficient self-groomers but no matter how young or old they are, they also need a little help with their beauty routine to keep their fur fabulous and their toenails trimmed. Grooming should never be considered a chore; consider it quality time with additional benefits as cats that enjoy being brushed and petted are more likely to be sociable and enjoy interacting with everyone in the household.

The Cats of Polsmoor Prison

A tiny kitten is rescued during a Mexican mission of love

On a quiet, leafy boulevard in Burbank, California, a colorful mural featuring a city night skyline and a huge cartoon-styled portrait of a cat captures the attention of passersby.

Nose jobs, tummy tucks, breast reductions, ear shaping, testicular implants and cosmetic dentistry. It reads like the line-up for a TV extreme makeover show but in fact it’s a list of cosmetic surgery procedures that can be performed on cats!

Everybody has a Secret Love. For legendary singer Doris Day, who made this song famous more than fifty years ago, it’s animals.

An exclusive look into the lives of religious leaders and their feline companions.