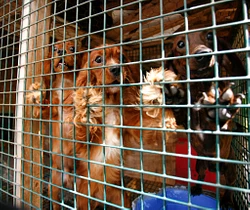 Since the start of the Covid-19 pandemic, thankfully  a guestimated 450 000 shelter pets found  homes, some foster homes, others forever homes. However, according to   Best Friends Animal Society there has been a reported increase in puppies purchased from pet stores, breeders and online retailers.

September 19 is National Puppy Mill Awareness Day, and the organization is taking this opportunity to help people make informed decisions about the source of most purchased puppies and the impact of choosing to buy rather than adopt.

As an organization whose mission it is to end the killing of pets in shelters, of course Best Friends encourages people looking for a pet to adopt from a shelter or rescue group, rather than buying from a pet store, breeder or online retailer. Adopting saves lives, while buying nearly always supports the puppy mill industry. Most puppies sold by pet stores and by online puppy retailers come from puppy mills. Although websites that sell dogs convincingly market the puppies as well-bred and lovingly raised, they too are most likely selling mill-bred pets.

“It’s not surprising that so many people are looking to acquire a pet amid the COVID crisis,” said Julie Castle, chief executive officer for Best Friends Animal Society. “During this difficult time, our pets serve as companions, provide emotional support, help us cope with social isolation and–in the case of dogs–get us outside for exercise and fresh air.”

Puppy mills are high-volume commercial dog breeding facilities, where profit and maximum production take priority over the health and welfare of the animals. Parent dogs spend their lives in small, dirty, stacked, wire-bottomed cages, often in the minimum legal size allowed (only six inches larger than the dog on all sides) and female dogs are bred as frequently as possible. Most puppy mill dogs have inadequate medical care and human socialization.

They live for years with few, if any, opportunities to play, be walked, or stand on solid ground. When they are no longer able to produce, they are often discarded or destroyed. These operations churn out an estimated two million puppies annually. There are an estimated 10,000 licensed and unlicensed high-volume breeding facilities in the United States, mostly concentrated in the Midwest.

Although breeders who sell puppies wholesale to pet stores and distributors are licensed and regulated by the U.S. Department of Agriculture, the minimal required standards of care imposed on breeders do little to protect dogs and do nothing to promote responsible breeding or ensure healthy puppies. Some licensed breeders own 1,000 or more dogs. Studies have shown that the poor conditions and high-stress environment into which the puppies are born can have a lifelong impact on their physical and emotional health and behavior.

Unsuspecting buyers are not informed of the backgrounds of these animals, nor the conditions under which they were bred. There are frequent reports of these puppies having congenital or communicable diseases, which cause heartache and expense for those who purchased them with the mistaken belief that they were buying a healthy pet from the best source possible, making this a consumer protection issue as well.

“Best Friends encourages anyone considering a new pet to adopt from a shelter or rescue group to avoid inadvertently creating demand for commercially-bred pets by buying from pet stores and online retailers,” Castle said, “If you buy a puppy online or from a pet store, you are most likely supporting the puppy mill industry because these are the two ways that puppy millers sell millions of dogs each year. And simply put, choosing to adopt saves lives.”

As awareness of the connection between puppy mills and puppies sold for profit continues to grow, more and more communities are banning the sale of mill-bred pets in stores. Three states (California, Maryland and Maine) and more than 375 municipalities have retail pet store bans that prohibit the sale of animals from breeding mills.

California recently celebrated the passage of AB 2152 (Bella’s Act), a bill co-sponsored by Best Friends to strengthen the statewide pet sales law and prevent pet stores from duping the public and selling puppy mill puppies as “rescues.” The bill has passed the legislature and is on its way to Gov. Newsom for his signature.

In 2017, Best Friends co-sponsored the first statewide bill in the U.S. to prohibit the sale of dogs, cats and rabbits in retail stores in California unless obtained from a shelter or rescue. Almost immediately after the law went into effect in 2019, pet stores began to undermine the law and deceive the public by forming sham rescues so that they could continue to sell high priced puppies imported from out-of-state puppy mills, misleadingly calling the sales “adoption.” These sales have continued throughout the COVID-19 crisis, putting the public and enforcement officers at great risk.

While retailers and breeders frequently use the term “adoption” to make people feel better about their puppy purchase, the term is not accurate, and buyers should not be fooled. Pet adoption is generally defined as “the process of taking responsibility for a pet that a previous owner has abandoned or released to a shelter or rescue organization shelter. Common sources for adoptable pets are animal shelters and rescue groups.”

And as sad as pet store puppies may look in cages, you can’t “rescue” a puppy from a pet store, because by buying one, you’re supporting their business and adding to the demand. If you do intend to buy a puppy, do your homework and read “Puppy Mill Dogs: How to Be Sure Your Next Dog Is Not From a Mill.”

Around 625,000 dogs and cats are killed in U.S. shelters annually, simply because they don’t have homes. When you adopt, you’re not only refusing to support puppy mills, you’re saving a life and giving an animal in need the second chance he or she deserves.