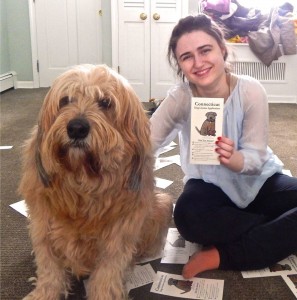 April is heartworm awareness month. This year, the campaign to end heartworm disease has special meaning for Annie Blumenfeld , a 17-year-old school girl from Connecticut.

She has been campaigning at state level  that dogs get a compulsory check-up  for heartwork  before a dog licence is issued in the state.

While her campaign  at State level is on-going, for now, thanks to her diligent efforts, the Connecticut dog license form will now have a heartworm check box to draw awareness to the disease  along with  artwork of a dog drawn by Blumenfeld and inspired by her dog Teddy.

Blumenfeld first became aware of heartworm disease when her family adopted their dog Teddy, only to discover, after they brought him home, that he suffered from the disease.

The struggle to bring the dog back to health prompted Blumenfeld to take on the challenge to eradicate the disease in her home state.

As part of her Wags4Hope campaign, she launched a website and a Facebook page to draw attention nto her project. She is also a very accomplished artist. So be sure to check out her beautiful artwork which she donates and sells to  to further her cause.

“The idea is to get other states to follow suit and draw attention to the disease with a health check box on the dog licence form all over the country,” she said.

Heartworm disease is a serious and potentially fatal disease in pets in the United States and many other parts of the world. It is caused by foot-long worms (heartworms) that live in the heart, lungs and associated blood vessels of affected pets, causing severe lung disease, heart failure and damage to other organs in the body.

If untreated, the number of worms can increase and dogs have been known to harbor several hundred worms in their bodies. Heartworm disease causes lasting damage to the heart, lungs and arteries, and can affect the dog’s health and quality of life long after the parasites are gone. For this reason, prevention is by far the best option, and treatment—when needed—should be administered as early in the course of the disease as possible.