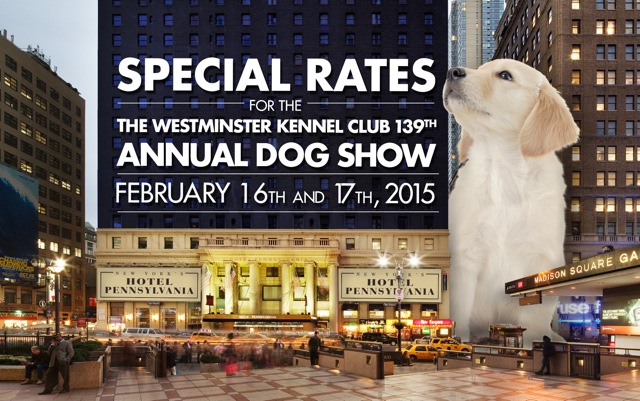 “We are ‘paws’-itively excited to be welcoming back all of the Westminster VIP’s (Very Important Pooches),” said Gene Nicotra, General Manager/All Dogs’ Best Friend at the Hotel. “Our perfect location and exclusive amenities are a treat for all Westminster hopefuls and fans alike.”

New York’s Hotel Pennsylvania is the only hotel for Westminster competitors and they know it. From ‘pup’tual Westminster wedding ceremonies to hosting an annual Pet Fashion Show, the Pet Friendly Hotel of the Year always goes the extra mile. To prepare for this special event, the hotel is planning to set up a variety of exclusive onsite daily events and amenities to coincide with the Show exclusively for guests/

Every year, the hotel converts the entire lower level into the world’s largest doggie green room featuring the largest in-door doggie spa with bathing tubs, dog grooming area, exercise/fitness area, and an in-house relieving area. The hotel also employs a Doggie Concierge to see to all the competitors wishes and whims.

Westminster is the oldest, continuous sporting event in America, with the exception of the Kentucky Derby. The Dog Show is the most prestigious of National Dog Shows and has been held every year despite power shortages, hazardous weather conditions, economic depressions and World Wars.

If you are in New York during this annual event, its definitely worth popping in to the Hotel Pennsylvania to check out the  behind-the-scenes action.