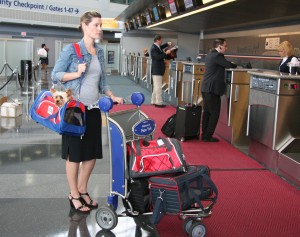 It’s always been my understanding that if you are allergic to pets and happen to be seated next to one on a plane, the airline staff you move you and not disturb the pet and pet parent.

When asked about whether (non-service) animals should be allowed to travel in airplane cabins, 52 percent responded “yes,” according to a survey. However, 63 percent of those who responded “yes” noted that it was acceptable only if the animals were kept in designated areas to accommodate those with allergies.

Several of the more than 430 survey respondents had comments:

“Cargo is a not good idea for the animals. I am a veterinarian and I can see potential issues with animal comfort and safety,” wrote one respondent.

Several commented that pet owners should advocate to the airlines to have better cargo care for animals, making travel in cabins a non-issue and one wrote that people put too much emphasis on pets and should just leave them at home while traveling.

“It is understandable that people have concerns about the potential of additional challenges of adding animals on already full flights,” says John McCarthy, president of GO Airport Express. “However, people also understand the potential dangers of having animals travel in cargo. We recommend that travelers tell their gate agents if they are allergic or prefer to be seated away from animals if there are any scheduled on their flight. GO Airport Express and most GO Airport Shuttle vehicles do allow for crated pets and all service animals are welcome.”

Its sound advice. If you are allergic, when you book a seat, call the airline and inquire if there is a pet seated texted to you.