Its nearly Super Bowl Sunday – and that means the Puppy Bowl!

This year, Animal Planet is asking the big question that’s provoking passionate debate as the big game approaches – “Ruff or Fluff?” It’s going to be pawsitively pawsome when America is introduced to its next legendary rivalry – Team Ruff verses Team Fluff – as the two sides play for keeps in a winner-take-all battle that will feature competitive scoring for the very first time in the 11-year history of the Puppy Bowl.

This year’s line-up boasts 55 puppies competing for the famed title of BISSELL® MVP (Most Valuable Puppy). On game day, fantasy leaguers can keep track of their teams’ stats via a live online leader board and are invited to vote in the Most Valuable Puppy poll, which goes live at kickoff at 3 PM (ET) on February 1.

Dan Schachner returns as America’s favorite rufferee to call the puppy penalties, tackles and touchdowns. Sideline reporter “Meep the Bird” is back on his perch to tweet live updates and commentary throughout the big game. Fans can follow @MeepTheBird to catch the latest news, puppy drama and locker room moments from inside the stadium. Viewers won’t miss a minute of excitement with aerial shots of the field and an impressive air show from hamsters piloting the new Twizzlers biplane.

If you’re not in the mood for Katy Perry but still want to see fireworks, Animal Planet’s own “Katty Furry” takes center stage in an all-new edition of the Bissell® Kitty Half-Time Show. 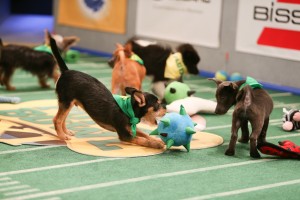 All of the puppies and kittens featured in come from shelters and rescue groups across the United States and even Puerto Rico. This year’s roster includes players from spcaLA (California), Green Dogs Unleashed (Virginia), Little Dog Rescue (Florida), Alamo Rescue Friends (Texas), Shih Tzu and Furbaby (Georgia) and Found A Hound Rescue (Illinois) among others. Animal Care & Control of NYC provides kittens for the half-time show.