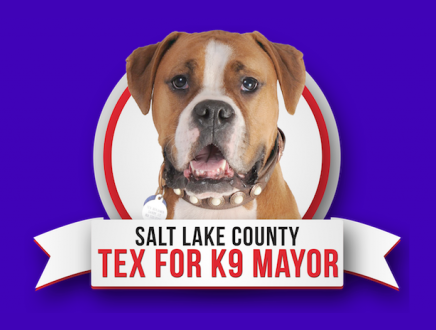 Mayor Ben McAdams and Salt Lake County Animal Services recently announced the election results of last month’s “Canine Mayor” campaign. Tex, the candidate supported by American Dog Rescue, raised more than $7,500 and won the top seat. The new Deputy Canine Mayor of Salt Lake County is CeCe, a three and a half year old mini Golden Doodle. Both will be sworn in during a special ceremony.

“I look forward to having the company of Salt Lake County’s first canine mayor or deputy mayor when I’m out at community events,” said Mayor McAdams. “I know Tex and CeCe will be excellent advocates for all of our community’s furry friends.”

A total of 14 canine residents of Salt Lake County participated in the election. While “caninedates” had to be Salt Lake County residents, voters could live anywhere in the world. More than 1,500 people cast their votes and donated a $1 or more to benefit Salt Lake County Animal Service’s Injured Animal Fund.

ADR believes Tex, as a death-row rescue and longtime Sandy, Utah resident, is the perfect fit for representing his furry constituents. The campaign itself was also a huge fundraising success, generating a total of $23,080 that will support animals in the most dire conditions.

According to Mike Reberg, Director of Salt Lake County Animal Services, “This is one of the most successful fundraisers ever held by our agency. The money raised for the Injured Animal Fund is going to help hundreds of injured and ill animals that find themselves in our care.”

Tex and CeCe will serve a two-year term and attend special events with Mayor McAdams.