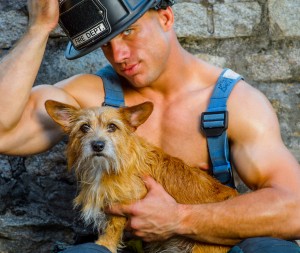 This year, the calendar has an interactive component. After purchasing the calendar, downloading and launching the free Layar app, you simply point your phone or tablet at the calendar month image (like you are taking a picture) and the calendar comes to life. It’s an innovative addition that CAS hopes will promote the calendar in a new way, and set it apart from other similar calendars that cannot offer the multi-media component.

In 2013, CAS launched the boldest animal rescue initiative ever undertaken in the Southeast – No Kill Charleston 2015, an all-out effort to save every treatable animal. Through public support and endorsements from such notable names like Martha Stewart, Kevin Nealon, Nikki Reed, Dave Navarro and Jennie Garth, CAS was able to achieve this goal ahead of schedule, making Charleston County the first No Kill Community in the Southeast. Sponsorships, donations and sales from the increasingly popular Firefighter Calendar ensure they are able to provide medical treatment for the animals in their care.

This is the second consecutive year CAS has created and sold their Firefighter Calendar. The 2014 Calendar Campaign brought in over $100,000 and raised awareness for Toby’s Fund. More than 9,000 unwanted and stray animals enter Charleston Animal Society’s doors each year. CAS is the community’s only organization that embraces all animals regardless of condition, age or breed; never turning them away. The cost to save these animals exceeds $500,000 annually.

Orders for the 2015 calendar have come in from as far away as Norway, Brazil and Australia.

“We’re thrilled our Firefighter Calendar has been so far reaching!” Eller said. “By purchasing this calendar you’re making a difference for animals like Toby, the namesake for the medical fund. Toby came to Charleston Animal Society with severe chemical burns, but was rehabilitated and later adopted by a loving family. That’s our goal for every animal who comes through our doors.”

The 2015 Firefighter Calendar may be purchased online at www.charlestonfirefightercalendar.com. To ensure Christmas Delivery, order by December 18th.