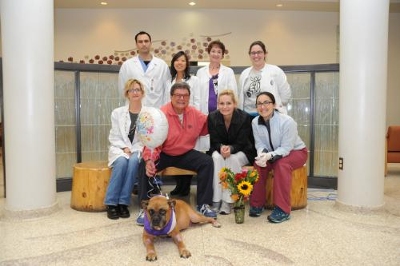 For the first time, a surgical team of world-class veterinarians performed an innovative brain surgery procedure last week known as transsphenoidal hypophysectomy, saving the life of a ten-year old boxer named Anna suffering from an aggressive form of tumor growth. While such surgery is now becoming common for humans, it is truly groundbreaking for a canine. American Dog Rescue provided the necessary resources for the operation after doctors determined that Anna was suffering from Cushing’s Disease, a common condition in older dogs that occurs when a tumor grows near the pituitary gland, impacting adrenal gland functionality.

This surgery was the only remaining option to prolong Anna’s life. Poodles, Boston Terriers, Dachshunds, and Boxers have the highest incidence of the disease. The success of Anna’s surgical approach brings new hope for dogs throughout the world plagued with this life-threatening ailment.

“It was the joint efforts of Internist Melissa Tucker (Utah Veterinary Center), renowned Oncologist Nick Bacon (University of Florida Veterinary College, Gainesville) and the Texas A&M team that identified and did their due diligence to find a solution to the unique and complex issues Anna faced,” ADR Founder Arthur E. Benjamin said. “Together, this group of experts located and concurred upon Dr. Owen’s surgical operation over other more traditional approaches, leading to a successful outcome that otherwise was impossible for Anna. We owe them and the Washington State University Veterinary Team a debt money alone cannot repay. It takes a village to make this kind of an impact for dogs worldwide.”

Sundays Hunt, Anna’s guardian and Utah State Director of The Humane Society of the United States, expressed her appreciation to ADR.

“It’s my privilege to both see Anna ‘fixed’ and to be part of the future of medicine here at WSU,” Hunt said.