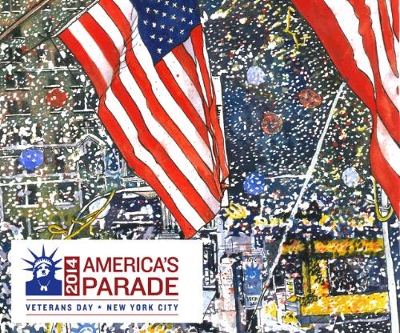 This year on Veterans Day, the 21,000 patriotic participants in the annual, nationally televised parade honoring our troops will be joined by a number of four-legged heroes – our nation’s military dogs – along with their two-legged hero handlers and some of the country’s top celebrities and veterans advocates.

Six military hero dog teams, each of which save the lives of an estimated 150-200 servicemen and women, will be saluted by America on their own parade float, joined by Army veteran, “Law and Order” star and dog lover Ice-T and his wife Coco; philanthropist and veterans advocate Lois Pope; animal star Hudson, who played “Willie Nelson” in the film “Our Idiot Brother”; and American Humane Association President and CEO Dr. Robin Ganzert, who has spearheaded the repatriation and reunification of these military dogs and 14 others with their former handlers this year alone with the help of Mission K9 Rescue and the U.S. War Dog Association.

“The thousands of dogs who serve in our nation’s military have sacrificed so much,” said Mrs. Pope, who founded and chaired the American Veterans Disabled for Life Memorial that was recently dedicated in Washington, D.C., and underwrote the effort to include these military hero dog teams in this year’s America’s Parade. “They are often the first line of defense, sniffing out bombs, mines, and other explosive devices. As they did on the battlefield, they can save lives here at home, just by being a companion to the veterans with whom they served. I’ve witnessed the profound impact that these dogs can have on them. It is my honor to support the efforts of American Humane Association, its K9 Battle Buddies program and its participation in the Veterans Day parade.”

“I served in the Army and know the life-saving heroism of these dogs,” said Ice-T. “It is time that we recognize both our human veterans who sacrificed so much and our four-legged veterans who save lives on the battlefield – and at home – every day.”

“These dogs are genuine heroes and deserve to be recognized on Veterans Day, alongside the human heroes who have so faithfully served our country,” said Dr. Ganzert. “We hope that this parade will shine a spotlight on the service of these under-recognized soldiers.”

Despite their heroic work, military dogs do not always come home when the men and women with whom they served end their tours of duty and return home. While many are returned, neither the military nor contractors are required to bring these brave warriors home so they can be retired in the U.S. and reunited with their handlers with whom they have formed such a deep and lasting bond. To help, American Humane Association has brought home 20 military hero dog teams this year alone with the help of Mission K9 Rescue and the U.S. War Dog Association.