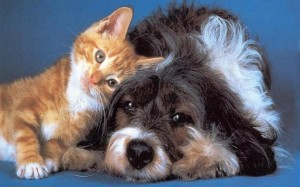 Did you some that some of the most famous dogs and cats in movies and on the Internet were adopted including Grumpy Cat?

This weekend you can adopt your own special “star” as Petco is hosting a nationwide adoption event.

For those ready to welcome their very own pet star into their life, Petco and Unleashed by Petco locations nationwide will be hosting adoption events the weekend of July 5-6, 2014. Pet adoption times may vary, so it’s recommended to contact the nearest location for adoption hours. For more information on adoption events in your area, visit www.petco.com/adoptions.

Here’s a list of some famous pups and cats that were adopted before the world knew their name:

Benji: The first dog to play Benji was a shelter dog named Higgins who was adopted from the Burbank Animal Shelter. The movie “Benji,” released in 1974, is the first film in a series of nine about the golden mixed breed dog with an uncanny knack for being in the right place at the right time.
Grumpy Cat: Arguably one of the most famous cats on the Internet, Grumpy Cat, whose real name is actually Tardar Sauce, has over five million Facebook friends and more than 300,000 Instagram followers.
Uggie: Born in 2002, Uggie is a Jack Russell Terrier famous for his roles in “Water for Elephants” and “The Artist.” Before his big screen debut, Uggie was rejected by his first two owners for being “too wild.”
Tuna Melts My Heart: Left abandoned on a San Diego road, Tuna was found by a rescuer, traumatized and afraid. The rescuer brought him to a local farmer’s market and Courtney Dasher adopted him. Now Tuna has almost 800,000 Instagram followers and is an advocate for pet adoption.
Baxter: Before playing Will Ferrell’s dog in “Anchorman: The Legend of Ron Burgundy,” Baxter, whose real name was Peanut, was adopted from the Los Angeles Animal Services East Valley Shelter. An animal trainer rescued Peanut after his life of abuse, injury and neglect, and turned him into one of Hollywood’s funniest pet sidekicks.