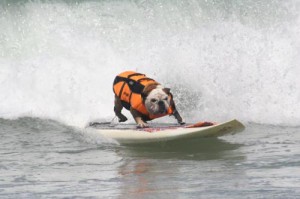 Dogs love to surf and if your pooch has never tried, well head down to San Diego next weekend.

Professional surfer, Taylor Knox, will be one of the judges in this year’s Surf Dog Competition taking place in Imperial Beach, CA on July 13, 2014.

“As a supporter of animal adoption and pet parent myself, I’m stoked to be partnering with Unleashed by Petco to support both the surfing community as well as the San Diego Humane Society,” says Taylor Knox.

Those who are interested in participating can register at www.unleashedbypetco.com/surfdog.