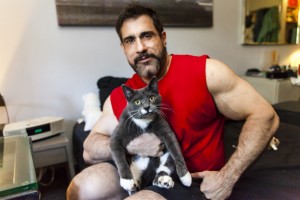 I was thrilled to learn that King the handsome  grey and white kitty who was so vicious kicked on a video pasted on Facebook has found a forever home.

The APSCA who came to his rescue posted an update on their blog which I am reposting here.

The ASPCA is the oldest animal welfare organization in this country and I can only applaud the work that they, and  other rescue groups do. They make the world a better and safer places for all animals.

King was adopted by Chris Scordo of Manhattan, right, who by chance saw a recent story about him in the  New York Daily News.

“I went to a diner for breakfast  and someone had left their Daily News behind,” explains Chris. “In the paper was a photo of this really handsome cat. I remembered seeing the earlier headline about him and thought the paper had been sitting around for a long time. I was sure the adoption was over. Then I saw the paper’s publication date and headed to the ASPCA.”

King, who suffered tissue injuries and bruising, was brought to the ASPCA’s Animal Hospital on May 7 by NYPD officers after being located and trapped by representatives of various animal welfare organizations, including the Mayor’s Alliance for NYC’s Animals.

Chris, whose 20-year-old calico named Chandler had died six weeks earlier from cancer, had thought about getting another cat.

“I didn’t think I could replace her so soon, but I had a feeling when I saw King’s photograph,” he says. “He has a very expressive face—very bright-eyed. I liked him before I even met him.”

To Chris’ surprise, he was the first to arrive at the ASPCA and get the chance to interact with King. He met with Adi Hovav, a feline behavior counselor, who green-lighted the adoption after speaking at length with the life-long animal lover who has a soft spot for felines.

“I stayed up the whole night that first night—King needs a lot of engagement!” exclaims Chris, who works in the IT field, and often from home. “He acclimated right away after hiding for only an hour or so, and has been playing and exploring ever since. He’s a fun cat—and a bit of a tough guy. I suppose that’s how he survived.”

Thank you Chris — the world needs more people like you!