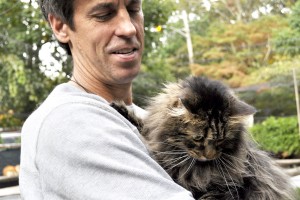 One year ago, 50 cats were rescued from a filthy hoarder’s house in Long Island, New York. The smell of urine, feces, and dead cats drove neighbors to call the authorities, leading to the discovery of dozens of malnourished and sick cats, and the homeowner, who was taken to the hospital for treatment.
Chris Arsenault, executive director of Happy Cat Sanctuary in Medford,  in photo above, was approached to help. “These poor cats were so traumatized, I just had to do something,” says Arsenault, who founded the non-profit sanctuary in 2012.
Prior to the rescue, the house attracted gangs, who tried to trap the cats to use them as bait in dog fighting rings. Today, the furry felines from Central Islip live happy, healthy lives at the free-roaming, volunteer-run sanctuary.
“If we hadn’t stepped in and saved these cats, most of them would be dead, or sitting in cages waiting to be euthanized,” says Arsenault. “I didn’t think that was fair to these cats who had already endured so much pain and fear.”
The fate of the sanctuary, however, hangs in the balance; with over 250 residents, food alone costs $400 per week.  Adoptions are steady and donations trickle in, but with rising food and gas costs, the sanctuary is struggling to operate. They are currently running a crowd-funding campaign through their website, www.HappyCatSanctuary.org, to commemorate the one-year anniversary of the Central Islip rescue. All donations will help the sanctuary continue operations and adoptions.
“We need donations to keep going,” Arsenault explains. “These cats are happy here, and they deserve to experience some love and kindness after all they’ve been through.”
Arsenault, 54, started rescuing cats in 2006 after his 24-year-old son Eric died in a motorcycle accident when a mechanical failure caused his throttle to stick.
“I wasn’t going to wallow in my misery or self-pity. My son loved animals, so I am honoring his memory by doing rescue,” says Arsenault. “I’m doing something positive with my life.”
The sanctuary specializes in rescuing cruelty and abuse victims, as well as cats with disabilities that are harder to adopt out because they are not considered the “perfect” pets.
“We have saved cats from people shooting at them or trying to poison them,” says Melissa Cox, the sanctuary’s volunteer Director of Communications. “We’ve rescued cats that have been tortured, burned with cigarettes, thrown out of car windows, left to die in boxes in the freezing cold.”
“The only way to fight cruelty and injustice is with love and kindness,” says Arsenault as he pets a calico perched on his shoulder.  “There’s a lot of ugliness in this world. I’m trying to bring some happiness into it.”
For more information or to make a donation, visit www.HappyCatSanctuary.org.