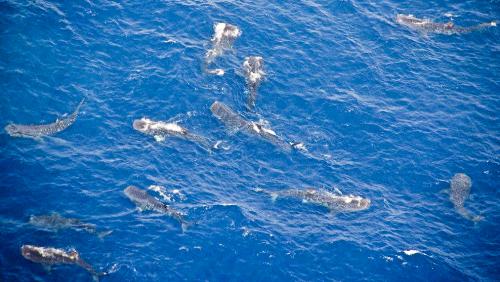 Celebrating the beauty and culture of Isla Mujeres, Mexico, the Department of Tourism for Isla Mujeres, Mexico, along with Ceviche Tours, an eco-tourism company; Amigos de Isla Contoy, which promotes the conservation of Isla Contoy and several environmental leaders have partnered to announce that the 7th Annual Whale Shark Festival will take place July 25-27, 2014.  The festival is an annual event held in Isla Mujeres, Quintana Roo, Mexico that showcases the region’s achievements, traditions and environmental splendor.

Following a kick-off parade on Friday, July 25, the Festival will showcase time-honored dances, local cuisine, nearby businesses and works from local artisans.  Guests can visit nearby attractions such as the Whale Shark Exhibition and view a display of the winning marine figures made by local high school students.

Visitors can have an ecotourism adventure of a lifetime and swim with the whale sharks, the largest fish in the ocean and endangered species.  Don’t worry: these magnificent whale sharks are filter feeders, like whales they feed on plankton, algae and krill. All swimmers will swim with fully licensed, expert diver/guides.  Guests can also participate in some of the other water activities that have made Isla Mujeres a favorite vacation spot: sport fishing, diving, and snorkeling tours of the pristine reefs.

“The Whale Shark Festival is a true celebration of the islands’ culture, heritage and the beautiful marine habitat that make Isla Mujeres the Jewel of The Yucatan Peninsula,” said Sr. Gustavo Rodriguez Orozco, director of tourism for Isla Mujeres. “We are proud to be partnering with several environmental leaders as well as Ceviche Tours, Amigos de Isla Contoy A.C. and Blue Realm A.C. to bring this festival to life.”

In addition to celebrating the beauty of Isla Mujeres, the Whale Shark Festival is a concerted effort to raise awareness of the need to preserve the area’s marine ecosystem.  It is part of the second largest barrier reef on the planet, and serves as the nursery of the Caribbean and the migratory path of whale sharks, Manta Ray’s and Dolphin as well as sea turtles, water fowl and game fishes.