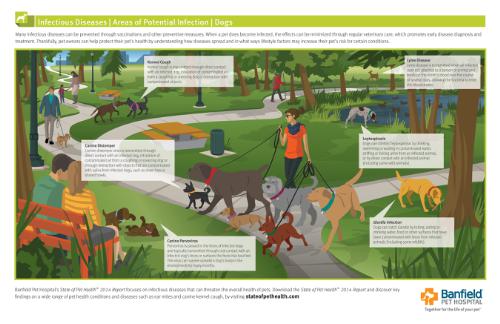 Banfield Pet Hospital®, the world’s largest veterinary practice, released its State of Pet Health™ 2014 Report today, revealing a staggering 48 percent increase in the prevalence of feline immunodeficiency virus (FIV) infection in cats and a 21 percent increase in the prevalence of infection with the bacterium that causes Lyme disease in dogs. The report, compiled by Banfield’s internal research team, Banfield Applied Research and Knowledge (BARK), analyzed data collected in 2013 from nearly 2.3 million dogs and 470,000 cats cared for in Banfield’s more than 850 hospitals in 43 states. The State of Pet Health™ 2014 Report focuses on common infectious diseases affecting dogs and cats in the United States, as well as the prevalence and geographic trends of such diseases, including Lymedisease, parvovirus, Giardia and kennel cough for dogs; and feline immunodeficiency virus (FIV) infection, feline leukemia virus (FeLV), upper respiratory infection and ear mites for cats.

The report shows in 2013, approximately 1 of every 300 cats seen in Banfield hospitals was found to be infected with FIV, with the highest prevalence of FIV infection in Oklahoma, Iowa and Arkansas. Also in 2013, approximately 1 in every 130 dogs was infected with the bacterium that causes Lyme disease. The report reinforced that the Northeastern states are a hot spot for Lyme disease, with the highest prevalence of infection in New Hampshire where 1 in every 15 dogs seen was infected, followed by Massachusetts andRhode Island. In contrast, only 1 in 1,000 dogs or less was infected in the Pacific Northwest. Furthermore, the infection was twice as common in large breed dogs as in toy/small breed dogs.

“The 2014 report highlights the increase in infectious disease observed at Banfield hospitals nationwide,” saidJeffrey Klausner, DVM, MS, DACVIM, senior vice president and chief medical officer for Banfield Pet Hospital. “It is our responsibility—as a practice and as a dedicated group of professionals who love pets—to provide the best possible preventive care, which leads to early disease diagnosis and management. This care creates a partnership between pet owners and their veterinarian to continuously identify changes in a pet’s overall health and behavior. At Banfield, we believe in creating a better world for pets—and together, we hope to protect pets from preventable diseases, help detect and manage emerging diseases and work to ensure all pets are as healthy as possible for as long as possible.”

FIV ON THE RISE; MORE COMMON IN MALE CATS

FIV infection is typically diagnosed by a veterinarian using a blood test. Banfield’s research shows male cats are three times as likely to be infected with FIV as female cats. Like HIV, FIV is a slow-acting virus spread through close contact with infected individuals. The virus is commonly transmitted during mating, through bite wounds associated with cat fights or from an infected mother to her kittens. FIV infection leads to permanent and progressive infection in affected cats, eventually attacking the immune system and increasing the cat’s risk for other serious infections.

Unfortunately, there is no cure for FIV. A vaccine is available; however, its ability to prevent FIV infection is not fully understood and major vaccine advisory groups such as the American Association of Feline Practitioners either do not recommend it or do not consider it one of the regular vaccines that all cats should receive. Thus, the best way for pet owners to avoid exposing their cat to FIV is to keep them indoors and away from potentially FIV-infected cats.

The Centers for Disease Control and Prevention estimates approximately 300,000 Americans are diagnosed with Lyme disease each year, registering the highest prevalence throughout the Northeastern and upper Midwestern states. Banfield observed a similar geographic trend in pets, determining pets living in the Northeastern states have the highest risk of contracting Lyme disease. The Lyme disease infection is caused by a type of bacteria (Borrelia burgdorferi), and spread through the bite of an infected deer tick. In fact, since 2009 there has been a 21 percent increase in the prevalence of infection with the bacterium that causes Lymedisease in dogs, corresponding to a similar increase in tick infestation over the same period.

Transmission occurs when the tick attaches and feeds on an animal or person’s blood over the course of 24 hours, allowing the bacteria to enter the bloodstream. While the bacteria cannot be transmitted directly from pet to owner, pets with access to the outdoors can bring an infected tick into the home or yard, thereby increasing the chance of humans coming into contact with an infected tick. Owners can protect their dogs from Lyme disease by regularly checking a pet for ticks and using flea/tick collars and preventive medications, such as topical flea/tick products.

For dogs, the most common sign of Lyme disease is recurrent lameness caused by inflammation of the joints, but may also include fever, decrease in activity level and appetite and in rare cases, acute kidney disease. Exposure to the Borrelia bacteria can be detected by a veterinarian using a blood test; however, many dogs that test positive may never develop clinical signs of disease.

The following list illustrates states with the highest risk and prevalence of infection affecting cats and dogs throughout the U.S.

Banfield is also tracking diseases such as canine influenza, leptospirosis, canine distemper and toxoplasmosis, for which the prevalence of infection on a national scale has not been quantified. Such diseases are either rare, emerging diseases or they cause signs of illness that are not specific to any one disease and/or testing is not routinely performed to detect them. For example, canine influenza is so new that dogs do not have the antibodies to fight the infection naturally. The disease is caused by a fairly new strain of the influenza virus that affects the respiratory system of dogs and is typically spread through the air, or through interaction with an infected dog or contaminated objects. Leptospirosis is an example of a disease that dogs are not routinely tested for but that continues to be a serious health threat to dogs and people alike. The disease, caused by infection of the internal organs, can be contracted through exposure to urine from infected animals such as dogs, livestock and wildlife. Though it exists all over the world, leptospirosis is commonly found in tropical climates, where the risk is even higher after a hurricane, flood or heavy rain.

As the 2014 report suggests, the threat of infectious disease is often closer to home than pet owners realize, even hiding in backyards and neighborhood dog parks. Seemingly innocent and regular activities for pets, such as drinking out of or swimming in a pond, sharing a toy or chasing wildlife may result in serious illness if a pet is not properly vaccinated and protected with anti-parasite medications. For example, dogs can contract leptospirosis by drinking, swimming or wading in contaminated water, or by sniffing or licking contaminated urine. Similarly, cats can come into contact with the parasite that causes toxoplasmosis by eating raw meat from infected animals, such as mice, or by eating items contaminated with the feces of infected cats. A veterinarian can provide additional information for pet owners to protect their pets against the spread of disease, as well as recommend vaccines that may be best for the individual pet based on the pet’s lifestyle and geographic location.

“This year’s report features an exclusive look at the infectious and emerging diseases affecting the overall health of our pet population,” said Sandi Lefebvre, DVM, PhD, an epidemiologist and senior research manager at Banfield Pet Hospital. “In our ongoing commitment to improving the health and well-being of pets, Banfield believes in preventive pet health care as a way to improve the quality and longevity of a pet’s life by reducing the risk of developing serious, costly and sometimes fatal diseases. Our internal research team (BARK) is dedicated to uncovering those trends in illness in an effort to provide even better care for our pet population in the future.”