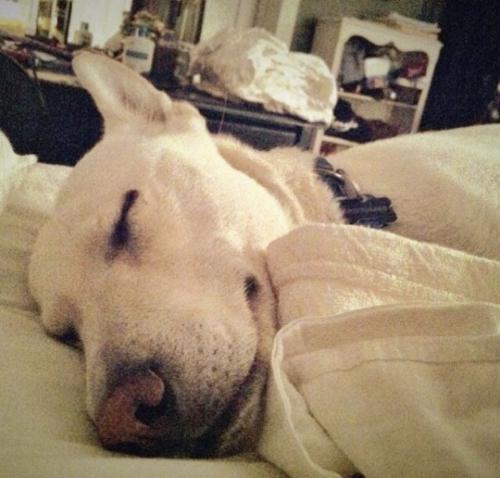 This week is National Sleep Awareness Week  (March 2-9) and to sleep, or not to sleep—with your pet—that was the question that a memory foam company asked in an attempt to find out who was sleeping in their beds.

They learned that in fact, 71% of pet owners sleep with their pets in their beds. This statistic further revealed that 43%  of pet owners slept with their pets every-night; 23% sometimes; and 5% when their significant other was out of town. Those bed-sharing pets also have favorite sleeping spots with 52% at the foot of the bed on top of the comforter; 23% snuggling next to their humans; 11% sharing a pillow; and 14% snuggling under the covers.

Apparently Novosbed co-founder and CEO, Sam Prochazka, was shocked to learn how many dogs and cats were sleeping on their mattresses.

“I’ve got a Greater Swiss Mountain Dog and before this survey, I would never have allowed him to sleep in our bed. Now that the results are in I’m re-thinking that, and we’re even considering adding a memory-foam pet bed line,” he said.

I have never thought of it as allowing a pet to sleep on the bed — no permission needed in my house – that’s where they are supposed to sleep! Pet beds are for daytime snoozes around the house…